Georgian food - the best little-known cuisine in the world

Having become acquainted with Georgian food nine years ago, and having, like many newcomers to the cuisine, fallen head-over-heels in love with khachapuri, I was certain that I would gain a ton of weight when we moved to Tbilisi.


As it turns out, I got sick of the national cheesy bread pretty quickly upon arrival to the country. But my love for the rest of the Georgian table has remained true.  My favorite thing about it is the variety and deliciousness of available vegetarian and vegan cuisine.  Orthodox Christians are called to fast from all or most animal products (with varying intensity) for roughly six months out of the year.  In Georgia, that isn't so difficult.

It's hard to pick a favorite among the vegan stars of the Georgian kitchen, but if pressed I think I'd have to go with the salad with walnuts.  At its core, it's just cucumbers, tomatoes, onions, fresh herbs, and crushed walnuts.  The real standout salads also include white wine vinegar, some of fresh, spicy peppers, and maybe a sprinkle of one of the classic Georgian spice blends.  It is delicious.

Right up there with the walnut salad is my old friend pkhali.  Pkhali is a vegetable-walnut pate made with white wine vinegar, garlic, herbs, and Georgian spices.  The photo above features my favorite pkhali, made with beet greens.  In the photo below you can see some spinach pkhali that I made myself at a local cooking class last winter. 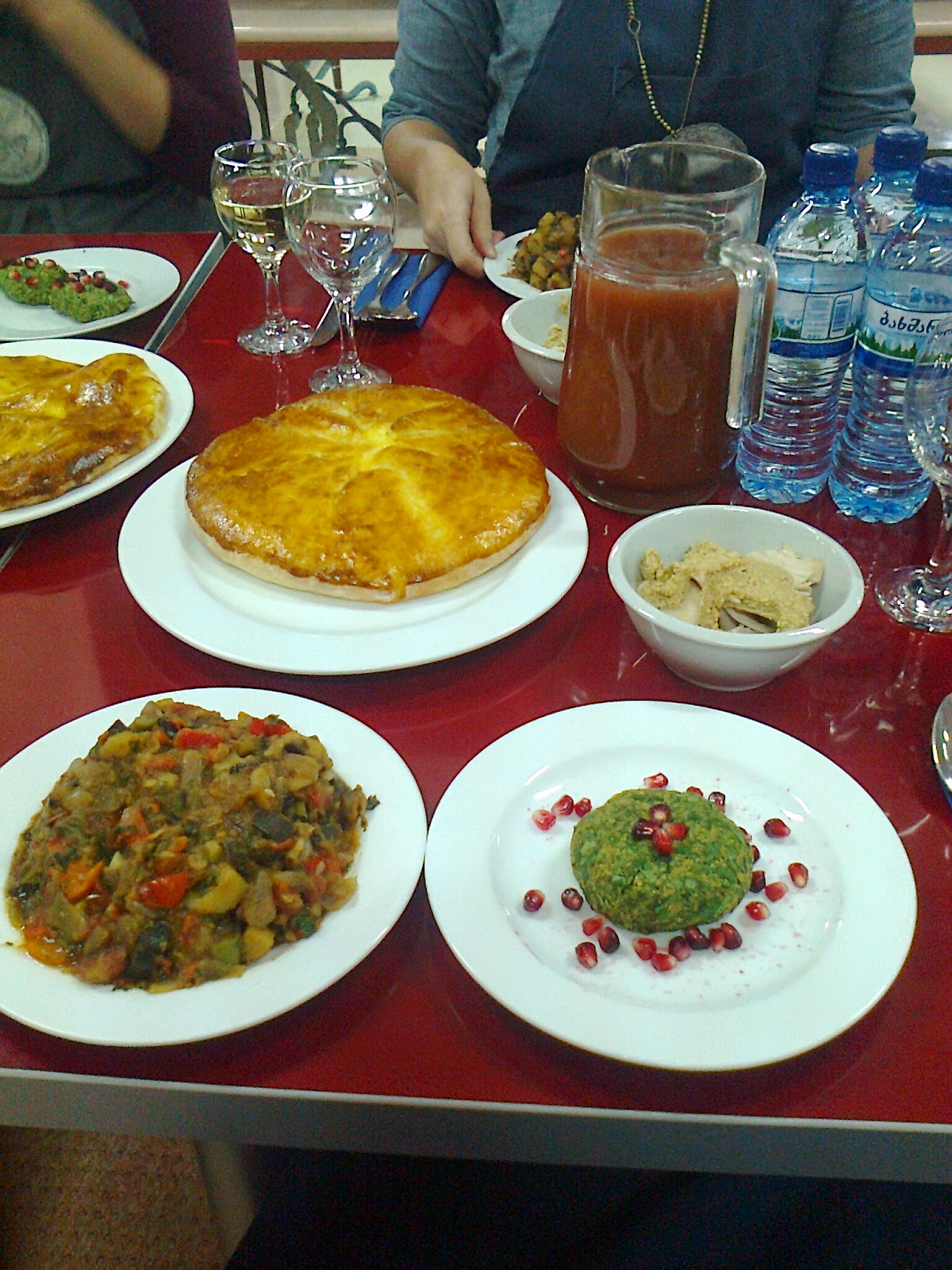 Lobiani, a bean-filled pastry, is another mainstay of the Georgian table. It is sold in roadside stands, too, and is a popular local snack food.  You can either get your lobiani flavored with lard/bacon, or in a fasting, animal-fat-free variety, which is also very tasty.  My housekeeper makes lobiani for us weekly, and it is my son's favorite food.  Unfortunately I don't have any photos of it, but it is a pretty humble looking thing anyway - just flat bread filled with mashed beans.

Georgian cuisine has a lot to offer the carnivore, as well.  Pork, chicken, beef and veal mtsvadi (barbecue/shashlik), meat kebabs, ... 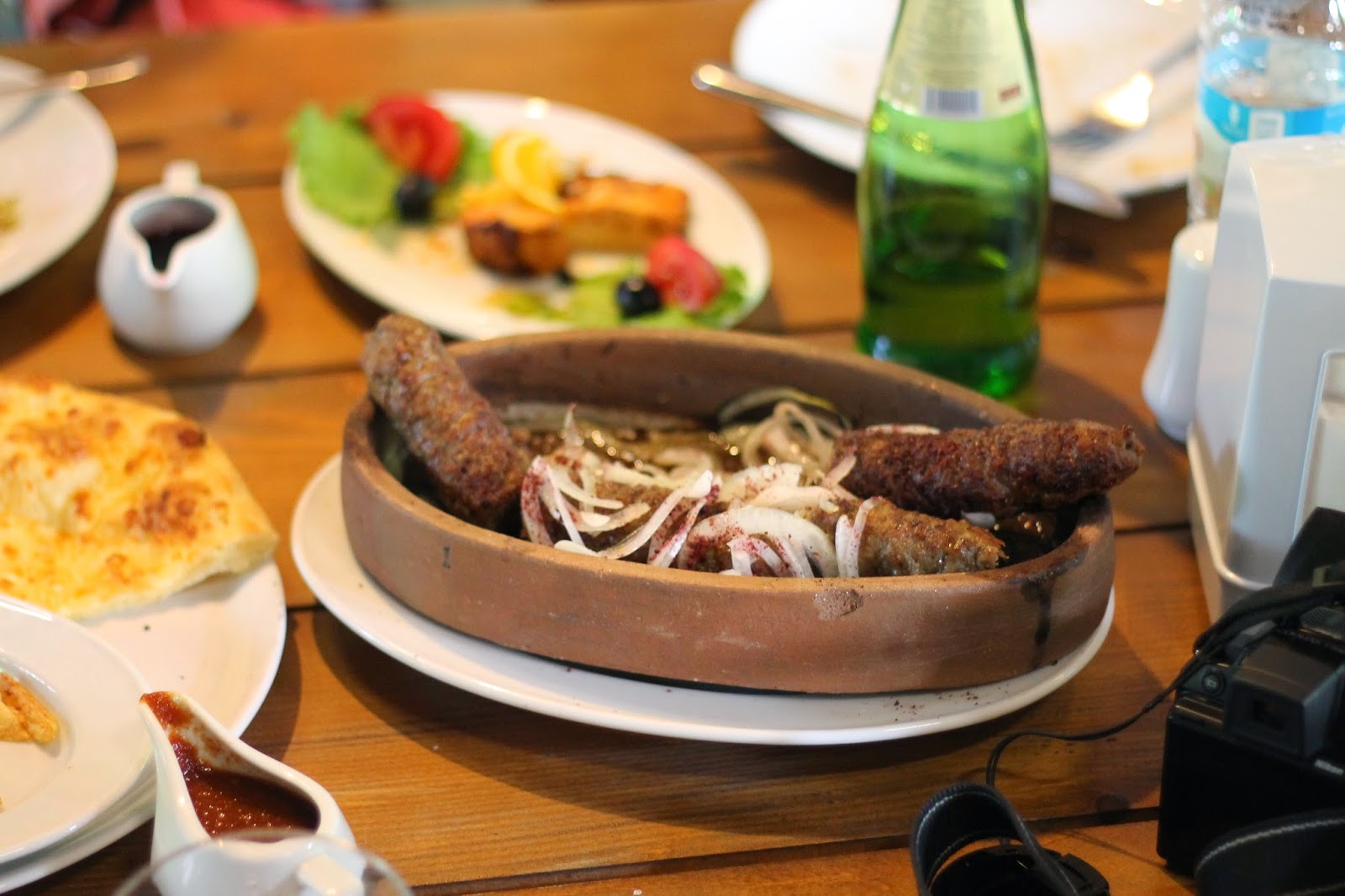 Another mainstay is khinkali - a dumpling usually filled with meat and herbs, but sometimes containing cheese, potatoes or mushrooms instead.  There is an art to eating khinkali.  You are supposed to hold it by the knob, take a small bite out of the side, and drink the juice inside before eating the rest of the dumpling and its contents. 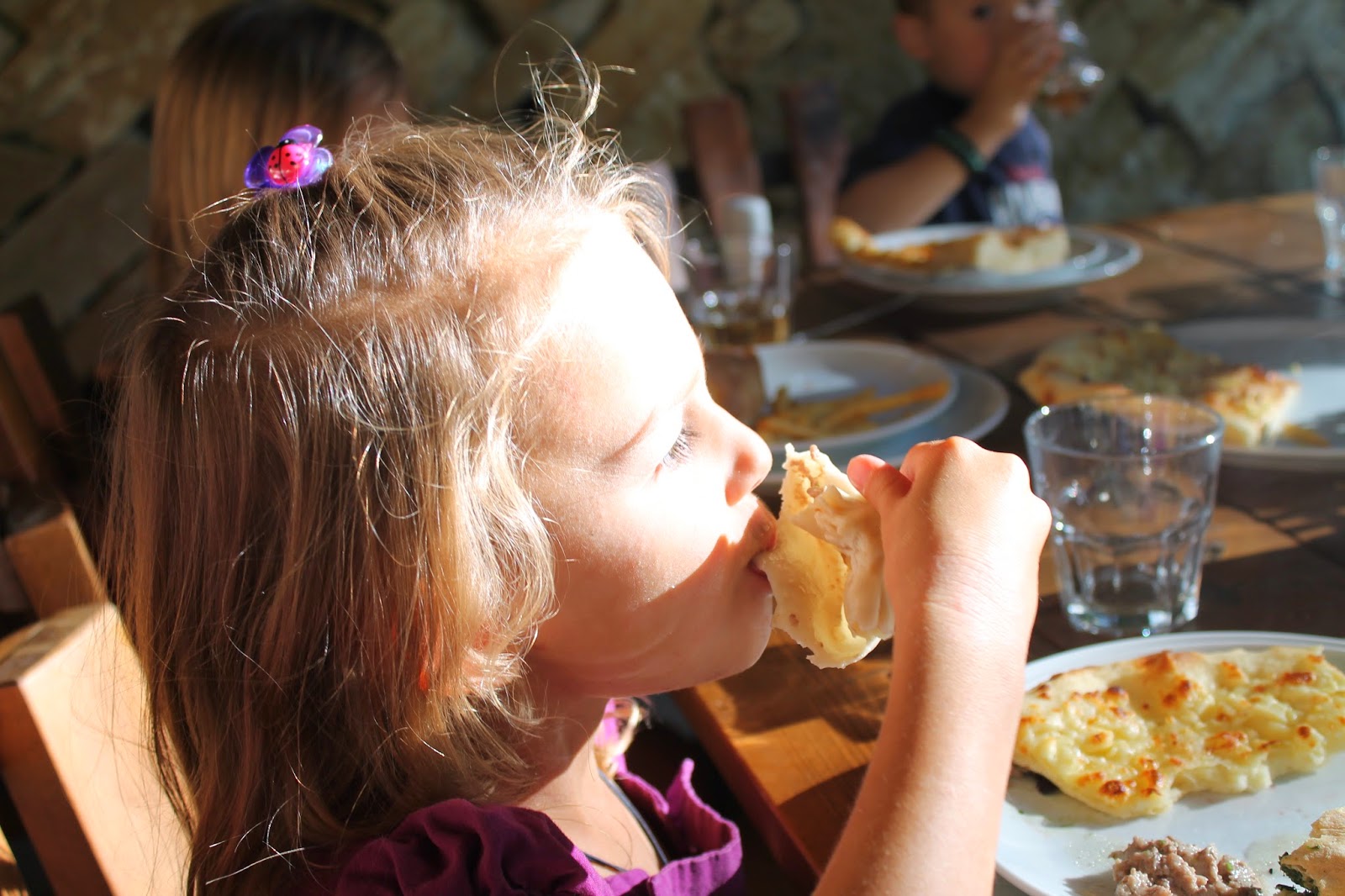 But you always have your rebels, and sometimes you'll find them eating their khinkali like so. 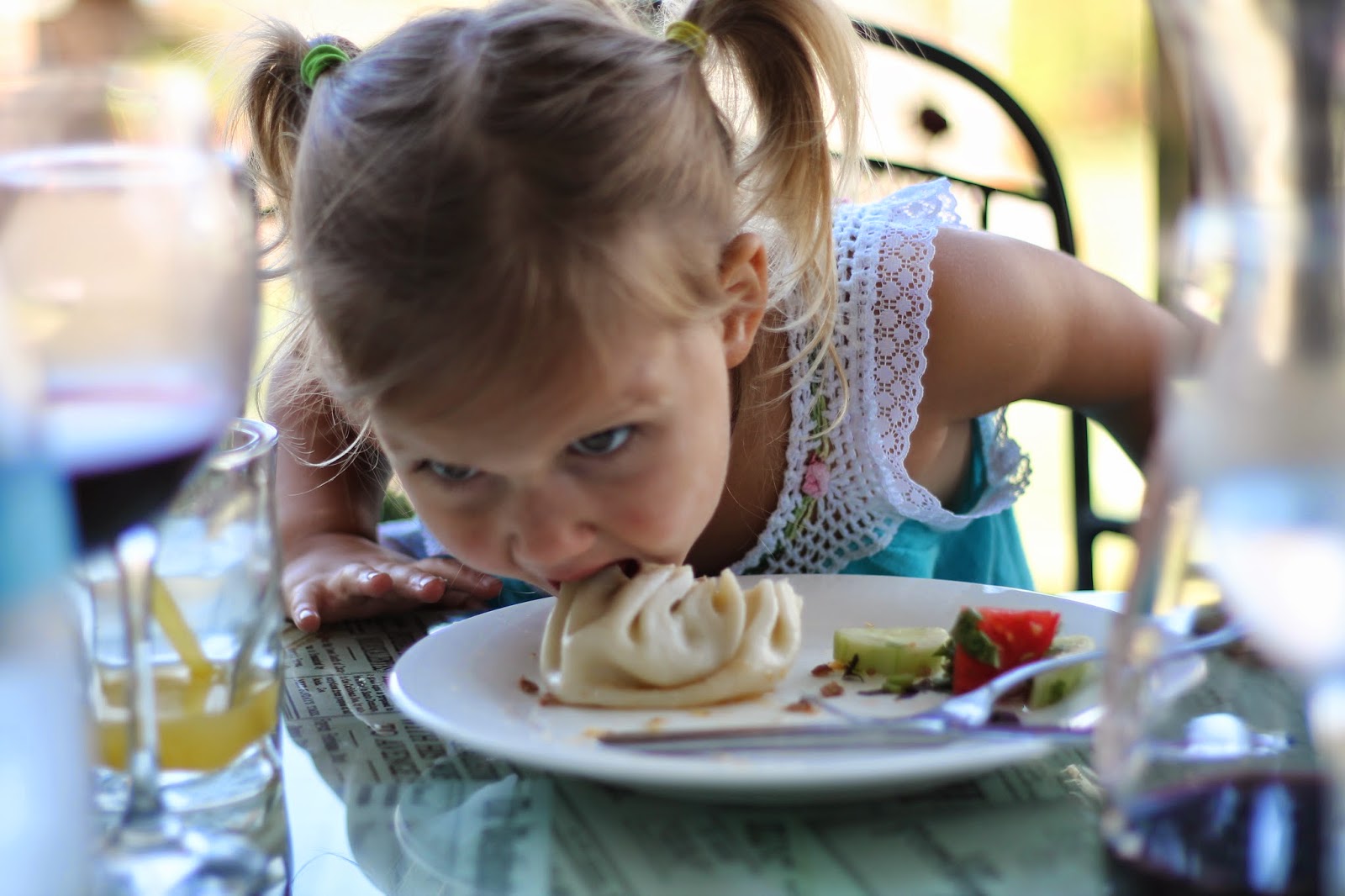 No matter how you eat them, they are darn tasty. 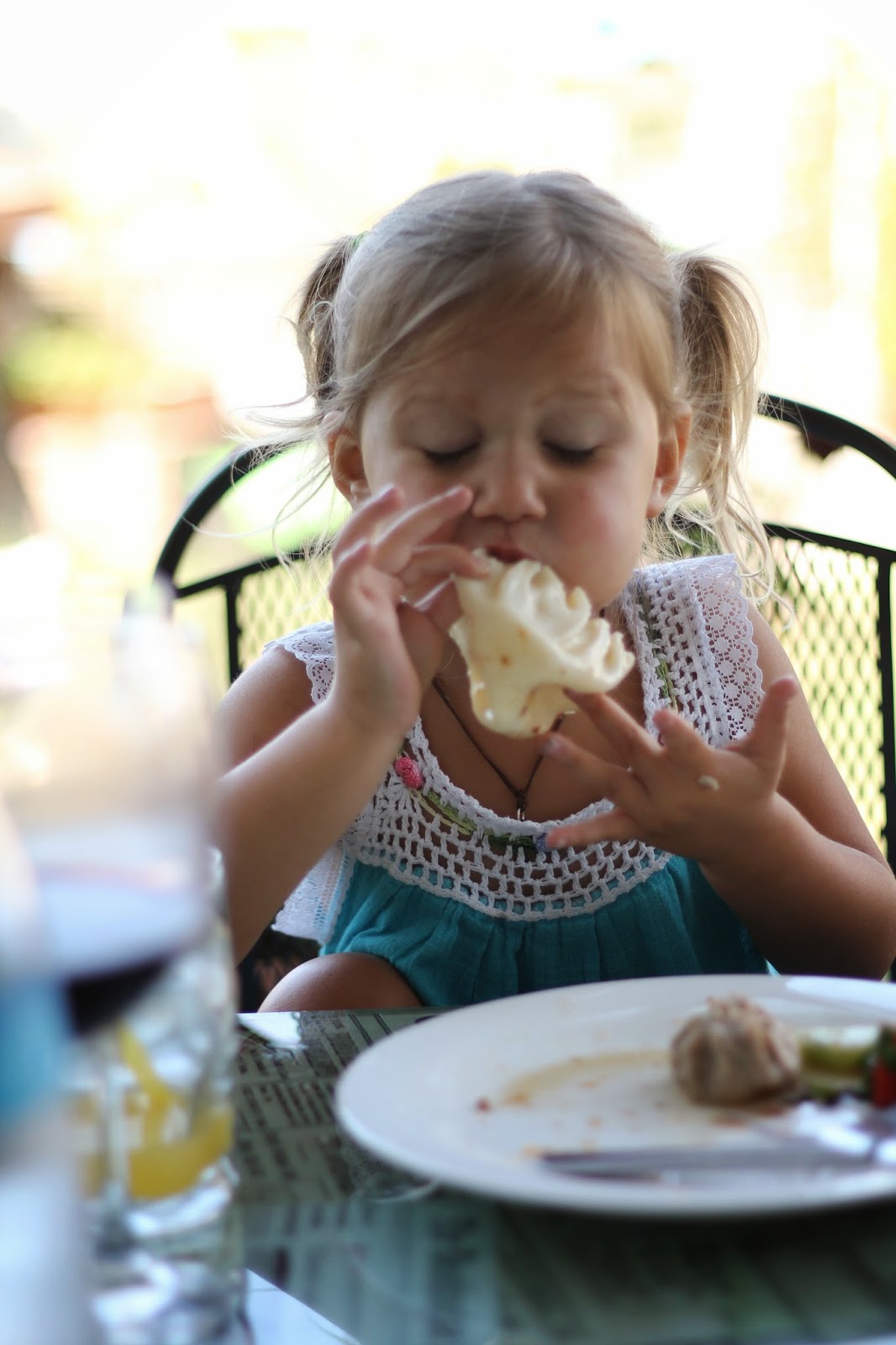 Which brings me to my last item - my beloved favorite, chkmeruli (or shqmeruli, if you prefer). 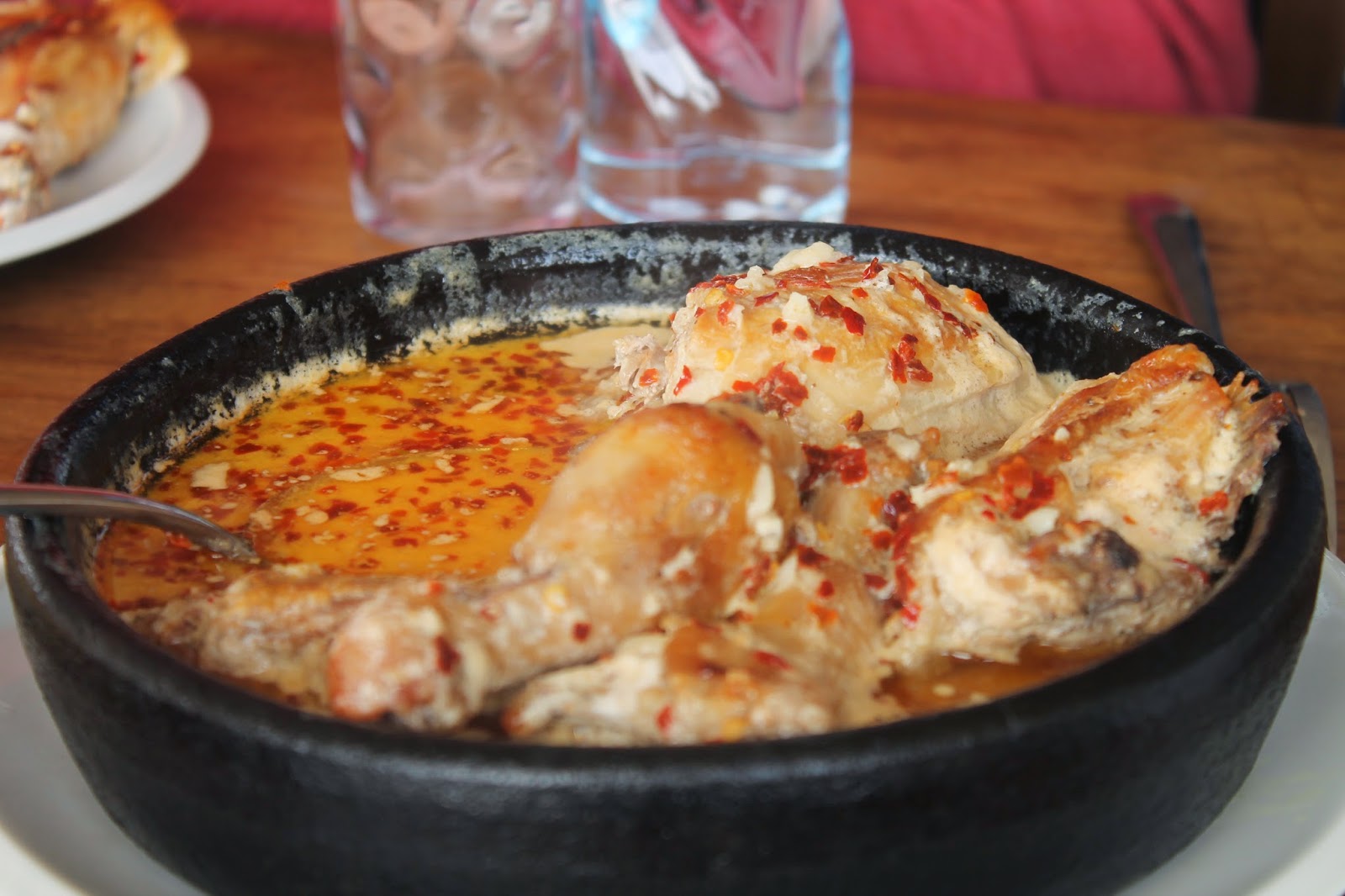 Ahh, chkmeruli.  This bowl of deliciousness consists of a well-fried village chicken immersed in a butter/milk/garlic sauce that is out.of.this.world.  I think it deserves another photo. 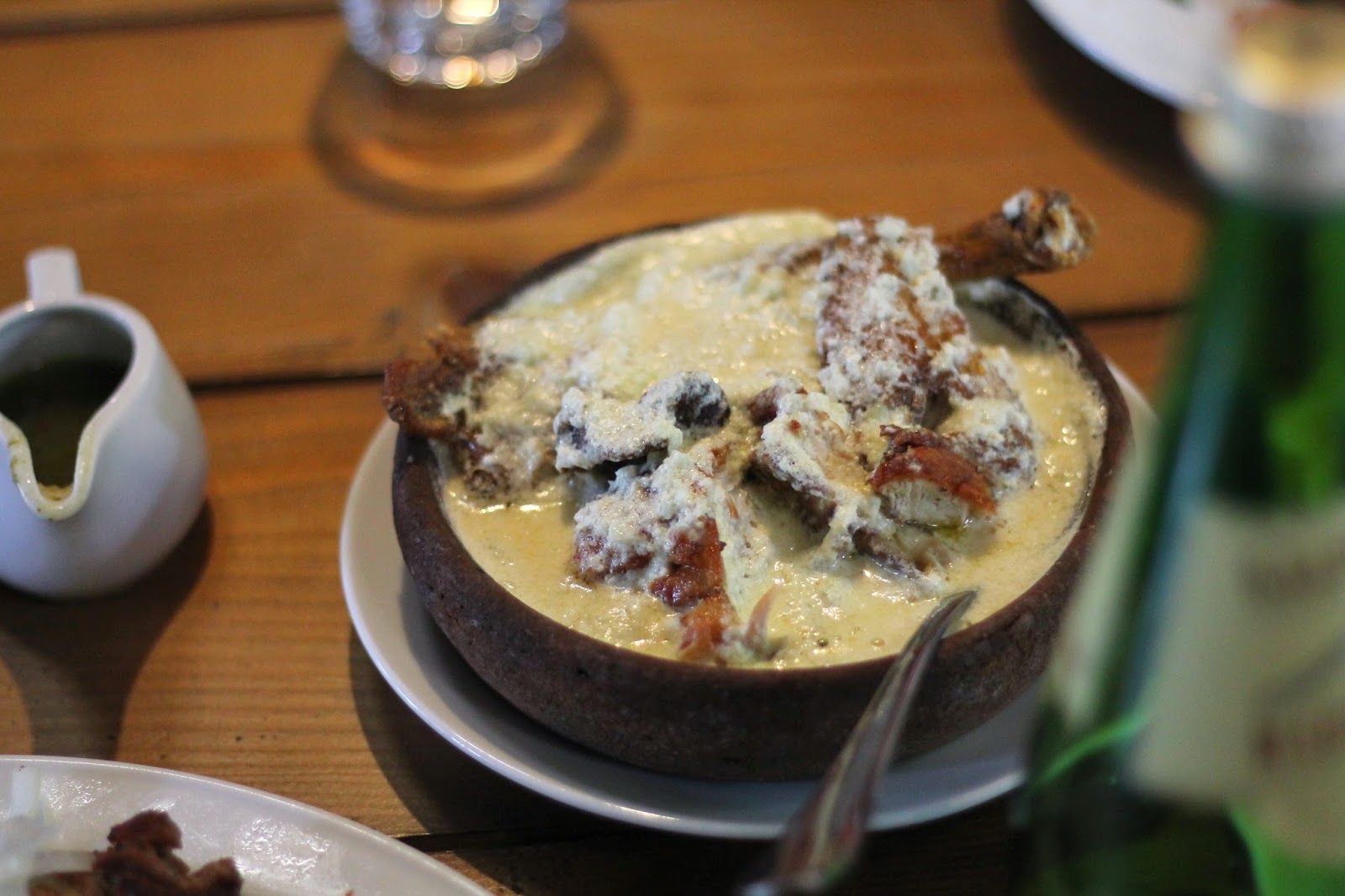 It does not get any better than this, folks.

Yes, I am going to miss Georgia.